Life Lessons We Can All Learn From Singer, Songwriter and Actress, Taylor Swift I have this really high priority on happiness and finding something to be happy about.” – Taylor Swift

It is a safe bet that there is no one in the world these days who does not know who Taylor Swift is. Yes, this American singer-songwriter is that popular. She is only 25 years old; but to many, she seems to be a veteran in the music industry. Since releasing her debut album in 2006 at just 16 years old, Taylor Swift has continued to put out more chart-topping songs, collecting numerous awards along the way. Her fifth and latest album, 1989, which was released in October 2014, has already sold millions of copies.

Taylor Swift’s fans are mostly teens and young adults. However, this does not mean that those who are older do not listen to her songs. According to many, the popularity of her music is largely due to the lyrics, which are described as very relatable. As a role model though, it is not only Taylor’s songs that we can relate to; as there are many aspects of her life where we can glean some lessons from.

For Taylor, success is the primary motivator to work even harder. She is one person who never rests on her laurels, and this is perhaps the reason why she has achieved so much at such a young age. She credits her parents for this attitude towards life, narrating that while growing up, she was never made to believe that she was entitled to success; rather, she was taught that she needed to work hard to get what she wanted.

Our dreams can only be realized if and only if we are willing to put in the proportionate amount of effort. Just as Taylor’s rise to fame didn’t occur overnight, we should not expect to succeed immediately but be prepared for the long haul. When going after our dreams, there will be setbacks along the way, but they will always be overcome with persistence, determination and certainly, hard work.

Be True to Yourself

Taylor is someone who acts consistently with who she is and what she believes in. When so many pop stars these days resort to notorious antics or being provocative just to gain attention and sell their music, Taylor Swift dares to go a different route. Her image and reputation reflects who she really is. This is evident in her music, how she presents herself in public and even the brands that she chooses to partner with. According to Taylor, she doesn’t allow what other say behind her back to define who she really is.

Being true to ourselves also involves accepting who we are. Pretending to be someone else for the sake of acceptance by others only leads to unfavorable circumstances or confusion. This is especially true for many young people of today who are subjected to so much peer pressure that they end up doing a lot of things they are not comfortable with.  Like Taylor, we must muster the courage to be real and show our true colors, regardless of what others may think. Genuine happiness can only be gained through self-acceptance.

Taylor Swift’s song, “Fearless,” is about the fearlessness of falling in love. We can certainly relate to this song, since the feeling of vulnerability that comes with being in love is something that many people shy away from. However, Taylor extends this fearlessness beyond relationships and to other aspects in her life. Asked what her idea of being fearless is, she responded by saying that “fearless doesn’t mean you’re completely unafraid and it doesn’t mean you’re bulletproof. It means that you have a lot of fears, but you jump anyway.”

We always marvel at people who accomplish great feats and wonder how they had the courage to do it. The answer is simple: they faced their fears. Many times in life, we find ourselves in situations where we need to take risks. During these times, we feel like there is a huge chasm between where are and where we want to be, and this chasm is full of fears that we have within us. These fears can make us indecisive even if we have taken all the time to think things over thoroughly. When in this kind of situation, it would be good to heed Taylor Swift’s advice to “jump.” It is usually the things that we are most afraid of that present us with the best opportunities for growth.

Don’t forget to have fun

Although Taylor Swift takes her career as a singer and songwriter seriously, she is not afraid to show people that she is having fun. Visitors in her Instagram account can see photos and videos of her spending time with her family and friends, baking in the kitchen or creating crafts, cuddling her pets or just being goofy. 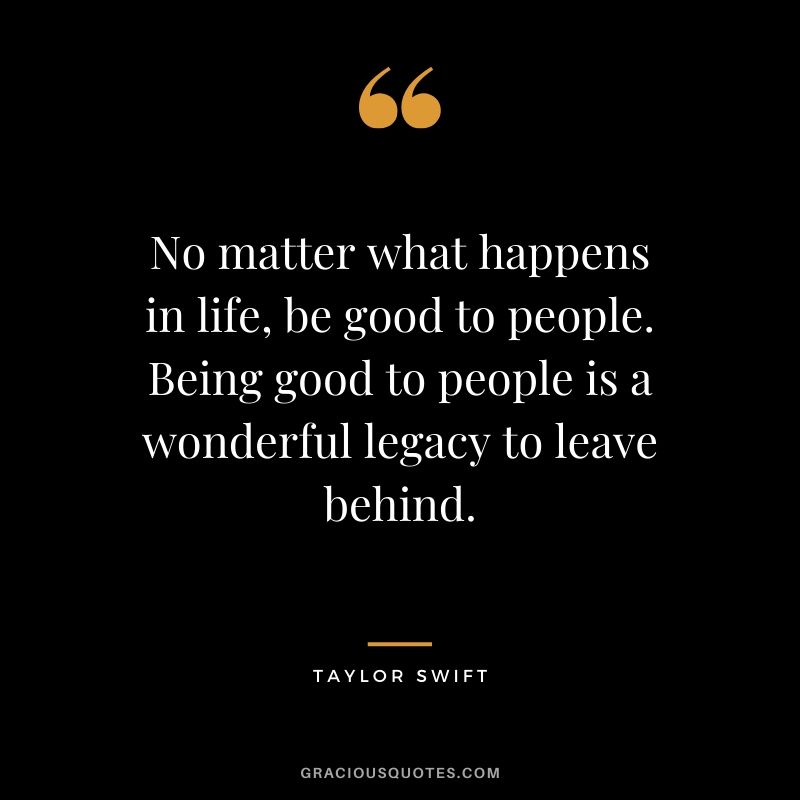 In this stressful world that we live in, it is easy to forget to have fun. We might be too preoccupied with making a living or be too busy taking care of others that we forget about ourselves. Life without fun is simply existing, not living. Fun doesn’t necessarily have to come from others. If we discover our own enjoyment from within, we usually discover that anything and everything can be fun. We each have our own idea of what having fun is. It could be around people we like spending time with, a hobby or even a job that we really love doing. Having fun is important if we are to live happy lives and we must realize that we all deserve it. Life Lessons We Can All Learn From Former Professional Footballer, David Beckham

Life Lessons We Can All Learn From the Ex-Arsenal Legend, Thierry Henry